Original name of this soup is Ciorba Radauteana.

“As the name suggests, the soup from Radauti was first prepared in the city of Radauti in Suceava County of Romania in the 70s. Was invented by Cornelia Dumitrescu. The housewife introduced chicken into belly soup – a Romanian traditional soup , at the insistence of her husband, who wanted chicken-flavored belly soup. He soon introduced the recipe to the menu of the restaurant where he worked. The soup was appreciated even by foreign tourists, who asked for the recipe. Many chefs or restaurant owners have introduced the recipe on their menus.” – Wikipedia 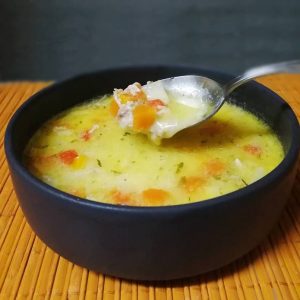 🇬🇧 and 🇷🇴 👇 Because yesterday was "

Just a pudding 🤗🤭 Swipe to see inside! 😉

Happy Valentine's Day! ❤️ The recipe for this

Hello my dear friends! 😊☀ Our dinner may insp

🇺🇸 Lemon Bundt Cake If you didn't know this

🇺🇸 As you have already seen, these days I ha

Are you a Vegan person? This is for you! ❤️ Us

Ghiveci, a Romanian stew made, usual, with meat an